I’ve been meaning to blog more often.  However, there has been a lot going on due to the holidays, and getting ready to move.  So, first, an update

-Our church is putting on a dessert theater production just before  Christmas.  Heather is in the play this year.  So we’ve had a few play practices to drive to and those are about to increase.

-Our house has been on the market for over a month now.  We’ve had a few showings.  So far, no bites (unless you count the ridiculously low one that we received early on).

– We’re still slowly packing and putting those things into storage.  However, now that the holidays are here, we did have to go back and dig out a few Christmas decorations because we do like to keep things somewhat festive.

-Just before thanksgiving, we also had our first snow of the season. 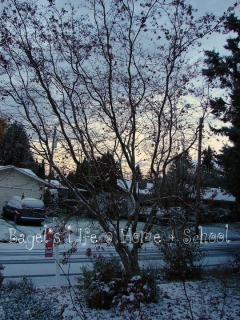 Initially, the kids were excited about the snow, however it was discovered to be the icy kind and not the kind for snowman making.  But it was pretty while it lasted (which was about a day).

-For Thanksgiving, we went to my sister’s.  She made the entire meal by herself, including 3 different pies (chocolate, pumpkin and apple—–all three were delicious!).  When we first arrived, Nephew #1, age 3, found his buddy Heather and they were off to his room to play.  Kylin checked out the family room where the toys were.  Nephew #2, wasn’t so sure about the unfamiliar adults who just arrived and hid behind a chair, and looked down at the floor, hoping that if he couldn’t see his auntie, then she couldn’t see him.  He was more comfortable with the kids than he was with us.   Heather spent the entire visit playing with her little cousins, so she really slept well that night.   After we were home, and the kids were in bed, we watched “Planes, Trains, & Automobiles”.

-We didn’t venture out at all for “Black Friday”.  Part of me would like to try doing that, and the part of me that doesn’t like crowds is happy to stay home.  My daughter thinks that it would be a lot of fun.  I’m thinking that I might actually try it next year, with my daughter.  This year, the stores were open at 10PM on Thanksgiving night!  Would a shopper going out to this be considered an “early bird” or a “night owl”?  I have friends who took part in this late night event, and not returning home until mid afternoon the next day.  That’s insane………..but it sounds like fun, if you’re with friends or daughters.

-Now that Thanksgiving is over, we seem to have caught a little cold and we’ve each been in various stages of feeling bad or feeling better but needing Kleenex.  Twice now, we’ve had a lazy day around the house and I’ve been in my pj’s past noon (today included).  Sometimes it’s just nice to have a day with very few demands.   However, I do have some Christmas decorations that need to be put out……….and I do need to venture out and get a newspaper.