Actually, we really didn’t have a vacation this summer. We stayed home and did our usual daily routine all summer. We didn’t have the funds to go on any vacations or “daycations” so our fun times happened in our own town and the one on the other side of the freeway. For Labor Day, I had hoped to sleep in, however my internal clock wouldn’t let me. Normally, during the week, I wake up at 5:30 AM. This morning, I was able to sleep in one hour past that. After a morning of relaxing and then tidying up, we thought we’d go to Springfield. A mural of “The Simpsons” had recently been painted and the anniversary of the show had been celebrated at the mural last week. 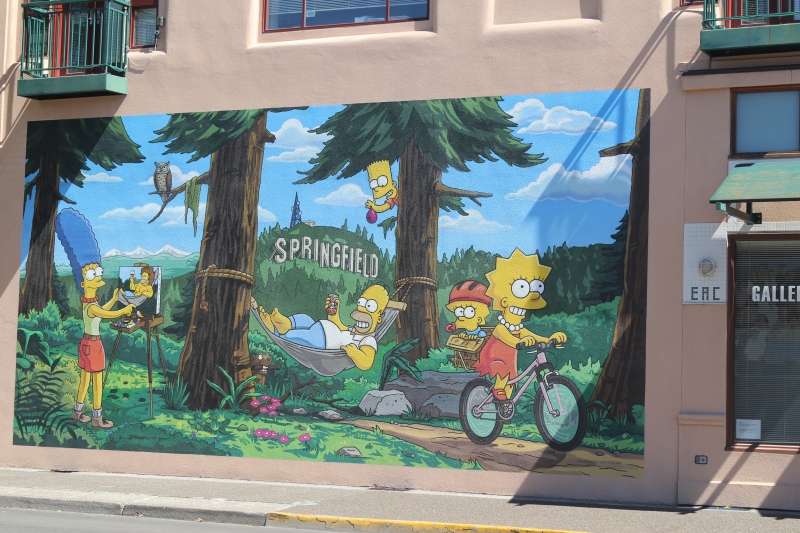 The Simpsons are officially in Springfield, OR now!

Just down the street from the mural, is Sweety’s Yogurt Shop which also celebrates Homer, Marge, Bart, Lisa & Maggie.

The Simpsons in the yogurt shop look kind of creepy if you aren’t prepared to see them staring out of the window.

We had hoped to buy some yogurt, however they were closed. A lot of businesses were closed in Springfield. If we had been in our town, yogurt shops would have been open. I’m not complaining though. Kudos to local businesses that let their employees enjoy the holiday. Our outing ended with driving to the top of Kelly Butte, from where you can see all of Springfield.

The view from Kelly Butte

. Our outing ended with a stop for a Slurpee because it was so hot, and our car currently has the 2/55 air conditioning (2 open windows/55 mph). Now we’re tucked back into our cooler home, getting ready to eat dinner (and pack the leftovers for Kevin’s lunches), and thinking about the beginning of the new school year.

Hello September!
The month that marks the end of summer fun and the beginning of school. Thoughts start turning toward holidays and preparing for them. There’s already a nip in the morning air, but it doesn’t stay long enough to start wearing the warmer clothes. That will start in a month or two. I’m looking forward to trying new recipes for soups, stews and excuses to make hot cocoa! Last night, I was so tired when I went to bed, that I was sure that I would sleep in until 8 this morning. Nope. I woke up at 6:30. When my kids were small, I didn’t mind waking up so early on a holiday because I was going to a local thrift store for their “everything is half off” sale and if I wanted a shopping cart, I needed to be in line well before the store opened. Maybe my early rising is because I normally wake up at 5:30 AM, that my internal clock only gives me an extra hour of rest on my day off. So, since I’m awake, I’m enjoying the quiet, with my coffee, and getting some reading and planning done before anyone else wakes up and starts asking me questions. The plan for today is to stay home and tidy up. We may drive around town later on and check out some of the murals. For those of you who are traveling today, stay safe 🙂 For those of you who are staying close to home, like we are, enjoy your day!