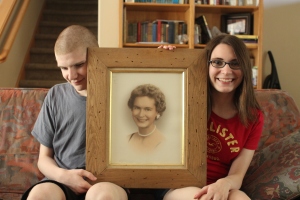 The kids posing with their grandma.

Today would have been my mother’s 70th birthday.   Since I can’t post a picture of her right now,  I thought I’d post a picture of my kids with a picture of her from when she was around my daughter’s age.   My grandparents had this portrait and another one made of my mother and my aunt.  They used to hang in my grandparents’ dining room.  The story that I was told was that one sister had her picture taken in her formal dress, wearing the strand of pearls.  Then she’d take off the pearls and give them to the other sister to wear for her portrait.

There have been times when we’ve celebrated her birthday with a quiet family dinner.  There have also been a few parties.  When I was little, my grandparents had a phonograph and they had actually recorded records of her birthday parties.  The one I remember listening to was from when she turned 8 and I think that my grandma had invited everyone from her class to the party.   There was a time when she was in her 40’s where we invited people to come over right after church one night to have some cake and visit.  My mom had no idea that anyone was coming, so after we came home from church, my mom was standing on the sidewalk talking to our landlord, when guests started showing up.  She came into the house with a big smile and said, “There are PEOPLE coming!”

The last birthday we celebrated with her was when she turned 52.  My husband and I had been married for just over a month, and hosted a birthday spaghetti dinner in our tiny, split-level duplex (it was a cute little place).  We decorated with streamers and balloons, and we had one surprise.  We had also invited one of her best friends, Sammie, to join us.  By her reaction, I think that it was a good surprise 🙂 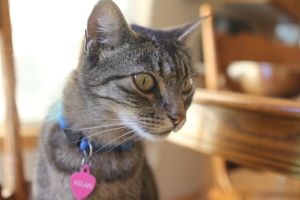 Nope!  This is Aslan’s doppelganger!

When we first saw him, we thought it was Aslan, but soon realized that he wasn’t.  We call him “Glitch” after a scene in “The Matrix” where Neo saw  two identical cats walk by the same doorway.  When he told Trinity what he had seen, she asked, “Was it a different cat or the same cat?”  If it was the same cat, then that was an indicator that there was a glitch in the Matrix.

We have no idea what his name is, but “Glitch” works for us 🙂 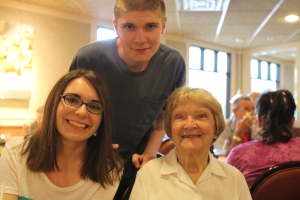 Last Friday was my grandma’s 95th birthday. We met her and my dad at our local Hometown Buffet for a birthday lunch, visit and let her know that she’s special.
Grandma has told me several times that she’s figuring out how to live as a person in her 90’s as she really doesn’t have anyone else’s experience to draw from. She and her younger sister (who will be 90 this year) are the two remaining siblings out of 7. Their other siblings, nor their parents ever made it this far. So she’s carving out the template for the rest of us.
Grandma Theda has been my closest grandparent (my granddad, her husband, was right there with her). She and my granddad loved their grandchildren, and we knew it. They played with us, listened to us, and were there on short notice when we needed them (I probably benefitted more than my sister and cousins because I came along several years before my sister and cousins did). They literally would travel to the other side of the world to see their grandchildren (3 of them lived in Switzerland, and at various times, Paris and Canada).
When I was 4, my parents were separated for a while and I spent a few weeks living with my grandparents. My granddad built me a swing from the rafters of the back patio with a rope and a plank of wood. Grandma would get out the games and toys that her kids used to play with, and she would actually play with me. Every night, she would tuck me in to sleep in my aunts canopy bed with the pink ruffles, and read to me poems from Mother Goose and other stories, in her diluted Texas dialect. Those toys and games have been passed down to my kids now. The canopy bed is now my daughter’s.
Spending the night at my grandma’s also meant the possibility of pancakes in the morning, upon request. She made the best pancakes! I found out later that a big secret to successful pancakes, is having a griddle! Grandma’s cooking was wonderful! She was from Texas and had been a farmer’s wife for many years, and she could really cook a wonderful meal! Family meals were usually followed by her delicious chocolate cake (think of a chocolate mousse with bits of angel food cake mixed with and topped with chopped walnuts). Her kitchen always smelled good. If my kitchen smells that good when I cook, then I know I’m doing something right!
She’s the only one who calls me “Elizabeth Ann” in a loving way. Usually, when I’ve heard my full name, it’s for business purposes or my mother was exasperated or angry with me. Everyone else uses my nickname.
She was also a very thoughtful Mother-in-law to my mother. She would help my mom during canning season. If my mom needed a babysitter, she was the grandparent that could be trusted to care for me. She and my granddad helped her after my parents divorced, even giving her a washing machine and dryer when we didn’t have one. They even came to my mom’s second wedding. When my mom was in her final days in the hospital, she and my granddad came to visit, and she even offered to take care of my mom. After my mom passed, Grandma and I already had a close enough relationship that she sort of stepped into that role as a mother (which was what I needed because I was getting ready to have a baby and it’s nice to have a mom when you’re new at it yourself).
My kids call her “Grandma” even though they know that she’s their great-grandma. She is a person that we have no problem finding a card for on Birthdays or Mother’s Day. The problem is picking just one! Those “mushy” cards describe her. She is a treasure who we are blessed to have in our family and in our lives.

Our Fourth of July was full.  After a breakfast of coffee and cinnamon rolls (mostly for the kids) we went to nearby Harrisburg for their annual parade.  Harrisburg is a small, one traffic light, farming town, and they put on a fun parade every year as well as a spectacular fireworks show along the river at night!  We’ve been attending for 15 years and it never gets old!  This year, we invited our friend Mike to join us, as he had never been to this particular event.

These are the faces that say, “Even though I’m a teenager, I’d love to have some candy thrown my way”

My kids are teenagers now, but a parade is still entertaining.  My daughter is still prone to run out into the street and pick up the candy thrown from the floats.  She’s also prone to picking it up and giving it to a small child who may have not seen the candy or wasn’t quick enough.    She’s a good girl.  We’ll keep her!

Antique machinery is always amazing, especially when it still works

After our morning at the parade, we drove back home for lunch, and the annual viewing of “Independence Day”.   It’s the traditional movie of the holiday at our house.  When we saw it for the first time, I was 8 months pregnant with our first child.   I don’t think she liked the movie back then.  It was a loud and intense movie, and she moved around a lot.  Now, she’s nearly 17 and wasn’t that interested in seeing it in person.

In the evening, I made a couple of pizzas for us to feast on while sitting along the waterfront in Harrisburg.   Bringing a pizza to the fireworks show is another tradition for this holiday.  After watching “Independence Day” 17 years ago, we went back to our spot for the fireworks show, and Kevin and the friends who were with us at the time, thought that a pizza would be nice and wondered if the local parlour would deliver to someone literally sitting in a field.  So the guys called in an order and within 30 minutes, a pizza delivery truck pulled up to the edge of the field.  I felt kind of bad for the other spectators there, as they started to gather around the truck thinking that this popular restaurant was bringing hot pizzas to sell.   They were rather disappointed when they were told that they needed to place an order for the truck to come back.

While we waiting for darkness, we walked along the waterfront, stopping to talk to people we knew, visit my church’s elephant ear booth, and stop by my friend Debbie’s house.   It’s been a long time since we’ve seen each other in person, and since our kids have seen each other.  All of the kids have grown taller, which, even though we’ve seen each other’s pictures on Facebook, it’s still a little shocking to see in person.

The evening ended with a spectacular fireworks show

.  In about 3o minutes, it was all over and we were back in the car, trying to navigate through snails-pace traffic and a couple of neighborhoods where fireworks were being lit in the middle of the street.    We arrived home rather late, expecting to see our cat, Aslan, hiding behind the toilet (his hiding place when there are loud noises outside).  Instead, he was on top of our fridge.

Maybe he thought that the breadbox would make a better bunker!