My long-time, close friend, Heather McMillan (and her husband Elton), founded a curriculum company a few years ago, that teaches and helps instill the good, basic character qualities, that will help children learn in the classroom and succeed in life once they reach adulthood.  That company is We Choose Virtues (which can be found at this web address http://we-choose-virtues.myshopify.com/).

Just so you know, I’m not being paid to promote this product and she didn’t ask me to.   However, she has brought it to my attention that there are parents of children with special needs, usually Autism, who have asked her if and how the Virtues can work in their particular situations.    My son is on the Autism Spectrum (PDD-NOS) and my husband and I have found plenty of opportunities to apply the Virtues in his life.

Before We Choose Virtues came on the market, Heather had an original list of character qualities for her own kids, and gave copies to several mothers in the MOPS group that I was attending.  I made copies of them and put them on the walls of my children’s rooms and went over that list with them.   My son was a lot younger and it didn’t appear that he was listening or paying attention to that list at all.  Then about two years later, out of the blue, he didn’t have a meltdown when something in the routine had changed.  I complimented him on controlling himself and he said, “That’s being flexible”.  So I knew then, that he was figuring it out.  I’ve noticed with my son, that if we just keep exposing him to things or situations, that he initially doesn’t like, that eventually, he accepts them and they become part of his routine.   That’s how we went from him not wanting to go to church at all, to where he is now, in that he loves it.  He used to sit in his seat during the worship service, not always wanting to be there (there was one night at church, where Elton came up and shook my son’s  hand, asking him how it was going.  My son, answered in a not-so-happy tone, “I’m flexible!”  Yes, I did laugh).

Once the We Choose Virtues curriculum became available for purchase, I bought the poster and the flashcards.  Since May’s designated Virtue is “Gentle”, I put it up at the eye level of my almost 15 year old.

I can find all sorts of areas to remind him to be “Gentle” because his initial response to life is anything but that.  If he is having issues because he didn’t like to be reminded to wash the dishes, he can be rather rough in his haste to get them done.  Or if he impulsively wants to hold a cat (who doesn’t want to be held), he can be a little rough in “loving” that pet.  If he’s trying to get past someone in a crowded mall, he might slam or shove a few people in his quest from getting from point A to Point B!  So the card is out where he can see it.  If you have more than one set of cards, or even the posters, you can put that month’s Virtue in various places all over the house (I would recommend laminating anything that might be tacked to the bathroom mirror, just so the steamy showers won’t wilt your paper). 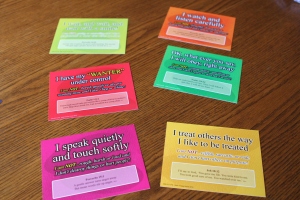 For my son, who is high functioning,  I find this program to be very helpful.  The definitions are short and catchy for those who have a shorter attention span and aren’t cut out for lectures.  However, for us, it does generate a lot of conversations.  Mostly hypothetical questions about situations that aren’t realistic, but are focused on the attitudes of people “involved”.

When I started with my son, I chose what I felt were the top 3 issues that needed work.  “Self-Controlled” came into play because when things didn’t go as expected or the routine changed without warning, he needed to learn to be flexible and control his urge to have a fit.  Another issues was learning to be patient.  If he knew something was supposed to happen at 10:00 and it wasn’t happening at that very moment, he needed to work on being flexible with his time and patient until the event did happen………..at 10:03.  Perseverant is helpful when he can’t find something (Diligence is helpful in this area too.  They do go hand in hand).  My son used to just look at a room, looking for something, but not looking under or around anything, and say, “I can’t find it”.   We’ve been working on him quite a bit, encouraging him to keep looking, without melting down, and to be patient with himself if he can’t find the item right away.  Now, once he finds the item, he’s as pleased as punch with himself and is all giddy and tells me, “I was perseverant and I found it!”.

So that’s just an example of how I approach it with my older, high-functioning Autistic son.   Thankfully, he’s also very verbal, so there are many opportunities to reiterate what the Virtues are, which ones need work and which ones we’re seeing him choose (and we do impress upon him that he is in charge of whether or not he applies those Virtues.  It’s not the circumstances that are choosing them for him, hence, self-control).

Investing the money, time and energy is definitely worth it.  I don’t know how many times I’ve been complimented on my teenagers’ behavior and also how my special needs son behaves, and I think that using this program has been a contributor to that.

Here’s the link again, in case you don’t feel like scrolling up http://we-choose-virtues.myshopify.com/

Have a great day!