1. Non-chocolate candy to pass out to the children in our new neighborhood ( none of whom we’ve met)………….check

2. Chocolate candy for my kids to devour while watching movies and passing out the non-chocolate candy…………….check (providing that Mom & Dad don’t eat it first)

3. Make list of movies to watch while random children knock on our door……………………..well, we have one figured out so far.

6. Defrost the pumpkin bread that I forgot to mail to my sister, so we can snack on it ourselves while passing out candy…………….check

Yesterday started off really well.  In spite of having to get up early, shower and leave before Kevin even left for work. I had a doctor appointment this morning.   One of the routine things they do, is to check weight and height.   It appears, that I’m half of an inch taller than I’ve been for the last 32 years.  Usually as a person ages, they get shorter.   So either I grew or I’ve been totally wrong about my height since I stopped growing at 12.  My daughter pointed out to me, “Your license is now correct”.

I also wound up getting a booster shot for Diphtheria, Tetanus and Pertussis.    After  several visits to the hospital, and the need for an IV almost every time, I still had that nervous feeling in my stomach over vaccination needle in my arm.  The last time that I remember getting a vaccine, was when I was 10, and I was in the school cafeteria with several other children.  When the needle went into my arm then, I howled and it echoed throughout the room. Yesterday, I was surprised that I barely felt it.   I also remembered a time, about 4 years ago when I took my son to the doctor for his vaccination.   As the nurse swabbed his arm with alcohol for the shot, she told him, “Now this isn’t the kind of alcohol that you drink.” to which we responded with, “Oh, so it’s good liquor!”.

Yesterday, the nurse informed me that my shoulder might be sore from the vaccination.  Today, she is right.  However, I won’t need to have that done for another 10 years.

The rest of the day involved the sport of bill-paying, however, that isn’t nearly as interesting or fun.  It does feel good to know that we can still drive our car, live in our house, have electricity, gas and water for another month.

The weather here in Oregon is making that odd transition from Summer to Fall.  We have mornings that are overcast, chilly and rainy followed by afternoons full of sunshine (though still a bit chilly), and finally moving into evenings that have enough of a chill to justify a fire in the fireplace and a hot beverage.

On this sunny/chilly morning, our cat, “Paws” (or “Crazy Panther” as our son has been calling him) thought it might be nice to catch some rays through the window, before the cloud cover comes back.

I’m sure that he’s happy that our window sills are wide enough for him to lay on.

Such a proud, entitled sunbather…….. 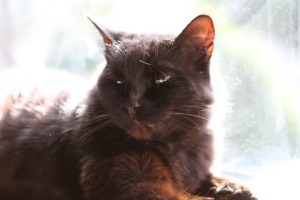 “No more pictures thank you!”

“This is my spot.  No one else is allowed to sunbathe here!”  Maybe we should have named him “Sheldon”

When the rain has passed, a young man’s thoughts turn to….. 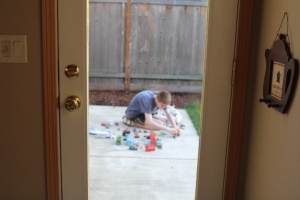 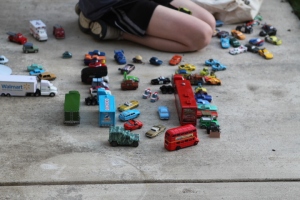 I wonder what the neighbors think about the noise in our back yard?

Nothing to see here.  Just a young man with his CARS collection.

Finally, it’s feeling like Fall, and we’re experiencing the weather that Oregon is known for.   The rain has come.   Last night, we finally had a downpour, which I like to listen to as the rain lands on our roof.  It makes me want to curl up on the couch with some tea and either watch a movie or read a good book.  When I go to bed, it lulls me to sleep.

For Oscar, the rain provides him with more places to get a drink

It’s starting to feel a bit more normal around here.As far as settling into our house goes, I would say that we are mostly settled.  I think that because our new home has an almost identical floor plan as our previous home, figuring out where the furniture goes, has been easier.  We did move a couple of pieces to different locations, however most of it is still the same.  There have been times where I still feel like I’m in the previous house and I think (briefly) that Alberstons, WalMart and Target are still “just down the street”.
We are settling in fairly well though. 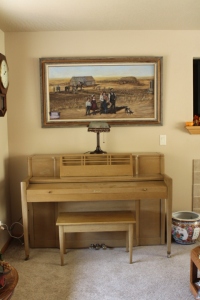 Just a picture showing the “put together” part of the house.  For anyone curious about the painting hanging above the piano, the adults in the picture are my great-great grandparents, with 3 of their 8 children, on their homestead…….in a soddy. 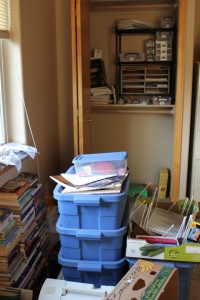 And here is something more realistic.  This is actually the bonus room, where the computer, older TV, kids toys,extra books and the sewing machine live.  I just haven’t sorted it out yet.

I think more bookshelves are called for.   Don’t you?

Another thing that is feeling more normal is the Fall weather.  When the calender showed that it was officially Fall last month, our weather still chose to be hot enough for us to wear shorts and sleeveless shirts.  Now, as we approach the middle of October, we still have sunshine, but there is a nip and crispness to the air, and the nights are really cold.   We’re finally getting those Fall days that justify sitting on the couch or a favorite chair, wrapped in a blanket and drinking a cup of hot cocoa or tea.  Very cozy!

Since my last post, we’ve also started the new school year.  I have a Junior in High school now.  This year, she’s involved in a homeschooling co-o, where she’s taking 3 classes.  She has writing, literature, and speech.   She has some very busy days ahead, but I think she’ll enjoy them.  My son, under normal circumstances, if we lived in a “one size/program fits all” world, would be a Freshman in high school.    We’re once again, going a different route to teach him in the manner in which he learns.   Right now, he’s very much into astronomy.  He’s fascinated with the stars, planets, watching the International Space Station as it flies overhead, and……….”Eve” from the movie “WALL-E” (which sparked his interest in space to begin with).

I should get going.

It’s nearly lunch time and the “young’ns” will be getting hungry.

One of them is showing me her sad puppy eyes, asking for a ride to the mall.