Ten years ago, my husband and I decided to try out a vegetarian diet.  He had some issues with acid reflux and we thought that perhaps that by trying the “no meat” route for 6 months, maybe the reflux would subside.  It did for a little bit.   By the end of 6 months, my husband was pretty much sold out on this way of eating and wanted the children to be vegetarian too.  So, because it wasn’t immoral or unethical, and not totally unhealthy, I didn’t argue.  In fact, I stopped eating meat also because I didn’t want to cause a rebellion amongst the children.  So I learned just what substitutes were out there for meat.  I learned how to use those substitutes in regular recipes, and over the years, we’ve been alright.

However, I’ve never been a vegetarian at heart, only in practice.   I come from a family with farming roots.  During the first 8+ years of my life, my father helped run my grandfather’s dairy farm.  We had cows around our house most of the time.  The cows that didn’t like to stay in the pasture, wound up in our freezer, and on our dinner table.  We had beef nearly every night.   So years later, when I stopped eating meat, there was concern from some in my family (my grandma mostly) that we weren’t getting any protein.  Well the meat substitutes were soy based, so there was protein.   Dairy was still part of the menu (however, my husband has gone vegan a few times, and he is doing the vegan way as I type this).

So as of 3 weeks ago, I stopped being a vegetarian.

So that leaves me as the only non-vegetarian in the family.   I’m still cooking meatless for the four of us.  Last weekend, I think in an attempt to show that it was ok with him if I eat meat, my husband offered to take me to a Wendy’s for a burger.  Well, I’m on Weight Watcher’s, and a burger would have been too many points for me, and quite frankly, I wasn’t in the mood for one.  Plus, I hadn’t eaten meat in front my family in several years.

I wasn’t sure when the opportunity would come up to for me to break back into the carnivorous world.  As it turned out, today was the day.  It’s Friday night, and a payday, which means it’s “takeout night”.  My husband wasn’t feeling good today, and he’s the one who usually procures the dinner for “takeout night”.  The overall request was for sandwiches from Subway.  The kids and their father had their usual “Veggie Delight” sandwich. 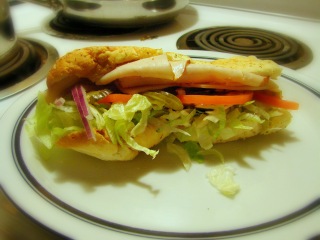 This entry was posted in Cooking. Bookmark the permalink.