(Originally posted on my old blog, August 18, 2010)
So, now that my purse was packed, as our suitcases.  I thought that we would be able to get away with taking one suitcase, however after packing what I needed (for anything that could happen), I realized that there wouldn’t be any room for my husband’s clothes.  So I dug out another suitcase.  It was smaller than mine, but I’ve noticed that men don’t pack as many things as women do (I went on a trip with my dad once, and all he packed was his shaving kit, a coffee maker and a fresh shirt and underwear for the next day……just the necessities).    Women pack for any occasion or weather change that may come up, so I needed that larger suitcase for myself :)I was up late the night before, making sure that we had everything we needed, and that the kids would have everything they needed for their stay at my friend’s house, and making sure that the cats would be taken care of etc.  I think that I finally went to bed near midnight (all of that hard work and stressing paid off too because we didn’t forget anything!  I was a very good packer).

I woke up at around 5AM as to get a shower in.  We have 4 people and a water heater that needs about an hour to heat the water between showers.  The ladies go first, because we have hair and we like to kind of fix it up a bit, kind of, sort of (well maybe not for a road trip, but I wanted mine to be clean and dry at least, I didn’t want my spouse offended by the filthy chick in the passenger’s seat).

We took the kids to my friend’s house, said our good-byes, thanked my friend again for taking them for the weekend, and headed off to find some fast food breakfast.

That’s right, a grilled cheese English Muffin.  We had a good laugh about that and figured that it was probably the equivalent of what we’d normally eat at home.

Then we found a local coffee stand for our “morning fuel” 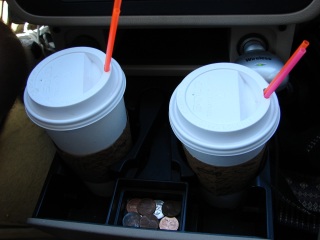 And we were headed North…

I lived on a dairy farm when I was little, so I like to see cows grazing in the pasture. 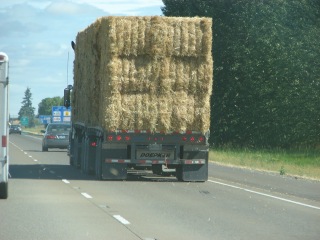 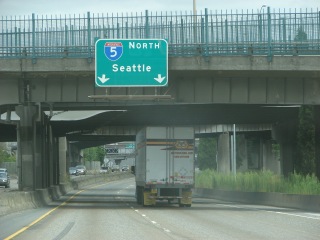 Once in Portland, we found the sign leading to our destination!  Excitement is building!  And apparently, so were rain clouds, because once we crossed over into Washington, the rain started coming down.

Not only was excitement building, but so was the need to use the bathroom.  So our first stop in Washington was at a Winco in Vancouver………..to use their bathroom.  My apologies to Winco for not buying anything, but thank you for the clean bathrooms!  Just a recommendation or two.  A door on the bathroom would be a good idea, and duct tape isn’t adequate for holding hand dryers on the walls.

We finally made it to our hotel in Federal Way, with about 2 hours before needing to leave for the show.  As soon as we entered the lobby, we noticed other fans of the group.  Other than the time that we went to Portland to see a documentary about this band, I hadn’t seen so many fans in one place (and that was about to change later in the evening).  I forgot to take pictures of our room and by the time I thought to do it, my husband was already napping in the bed and I was putting on my contacts and sprucing up for the show.   However, it was a really nice room!

So, that was the trip, and my next post will probably be about the show…………

This entry was posted in Travel. Bookmark the permalink.