My husband and I were checking our nearby Twitter pages and noticed that alot of folks were talking about where they were 10 years ago.  My husband posted that 10 years ago, he didn’t know how to spell “atheist” and now, he is one (and being the Christian wife of one, could generate a blog site of it’s own.  Tempting, but for now, I have no plans to start one).    For me, 10 years ago, I had two toddlers (3 and 1), now, ten years later, you can do that math on that one.  I also was recovering from a D & C that was the result of a miscarriage.   We were also watching the TV all day to watch the new year happen in the rest of the world.   Mostly because we’d been warned of Y2K and had been strongly encouraged to store water, food and other supplies should our power go out.  I woke up the morning of the 31st, turned on the news and the first thing I heard about was that the power was out in Paris, France.   It wasn’t due to Y2K.  Paris was experiencing a very strong wind storm.  As you all know now, Y2K didn’t happen.  There are the original naysayers that said that it wouldn’t in the first place and they like to laugh at those who were hoarding supplies.   They can laugh all they want.  If anything, the threat of Y2K, did bring about an awareness to the population that it’s a good idea to be prepared with those supplies in case of ANY emergency.

This is the second year that we’ve let the kids stay up with us to ring in the new year.   It’s exciting for them, and yet exhausting for us.  Our son, Kylin, is the type of person who is running on adrenaline every waking moment, even if that moment is at midnight.  When he goes to bed at his regular bedtime, my husband and I are mentally exhausted.  Our son spins, skips, and just stays very active until he falls asleep.  He talks as fast as he moves too (which is probably part of the reason that his sister shuts herself in her room).  He’s the boy who, after being awake for an hour in the morning, has us anxious for his bedtime to arrive.   So letting him stay up late, is a big step for us.

In preparing for this big night, I asked for everyone’s input on what to eat. 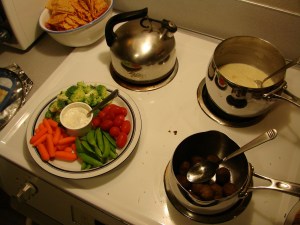 ~Kevin wanted cheese fondue.  We had this last year and he really liked it.  I used a Swiss cheese sauce this time from the Better Homes & Gardens cookbook.  for the sauce, we had things for dipping such as Potatoes, vegetarian meatballs,  raw veggies (so that we felt we were eating healthy).    He also bought some Kettle chips, and everything one needs to make margaritas (so he won’t need to make a stop at the 7-11 for Slurpees to spike). 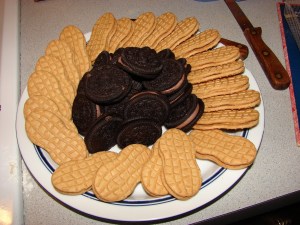 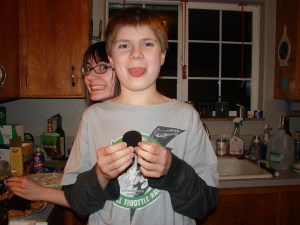 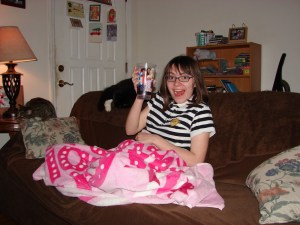 ~and Root Beer! (Yes, I realize that my giving them sugar contributed to my son’s busyness, but it’s New Year’s Eve!)

We started the evening with watching the Blu Ray version of “Star Trek”.   All but Kylin had seen the movie already.  Am I a “Trek Nerd” if I admit that this movie brought some tears to my eyes at some point?   Once the Trek movie was over, we still had time to kill, so our next movie was “Napoleon Dynamite”.   That one is just plain funny!  It took watching it about 3 times to grow on me, but it’s just a fun, goofy movie.  Our last movie of the night was “Paul Blart, Mall Cop”.  Kevin really likes this one.  It was Heather’s first time watching it and I don’t think that she liked it as much as her dad did.  I had forgotten how much swearing was in it too.  More than what my kids are used to hearing anyway.

Kevin finished the night by making Margaritas.  As he was crushing the ice in the blender, Kylin came in and asked what Kevin was making and then saw the blender and yelled “Smoothies!”.  Kevin had to explain that it was a “grown up smoothie”.  I will say that I did try one, and my conclusion is that I prefer regular smoothies, not the kind with the alcohol. 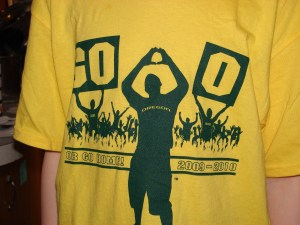 We’re sort of taking it easy today.  I didn’t have to make lunch (Kevin ordered pizza)!  I say sort of, because I need to finish the laundry and get the kids’ lessons planned for Monday as well as order some curriculum.   I was going to go grocery shopping today, but I changed my mind.  I’ll go tomorrow, when everyone else is.