Our Easter started earlier than usual. I decided to go to first service at our church, so that we’d have more family time during the day. Even in the early morning, the kids still had their Easter bags. 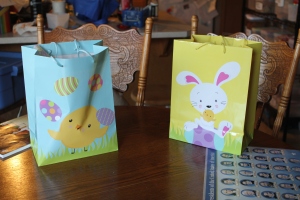 Bags full of candy and a gift!

Kevin had been up late the night before, so he was sleeping in a bit while the kids got up and checked to see what kind of candy they got (Reeses, Hershey’s eggs and Twix. Their dentist will probably have issues with me). After that, we quickly finished getting ready and hurried off to church (in which there were a lot of other folks who also decided to come early)

Since our kids no longer hunt for eggs, we had no real plan for the rest of the day. My only “plan” for the afternoon was to go outside to a park and take a family picture. I’m trying to get more practice taking pictures of people, as well as scenery. I don’t always have the time to do either. When we came home from church, Kevin had some ideas as to how we could spend the day. Bowling, and mini-golf were brought up, however, our son really isn’t one for games. I think that he expects too much from himself and if he can’t do well or win in that first round, he doesn’t want to play anymore. Another idea that came up was to go to Salt Creek Falls, which is probably about an hour’s drive East of town. Kylin loved that idea because he’s been wanting to get out of the house and out of town for weeks. So that is what we decided to do.

On the way to the falls, we stopped in a small town called Westfir, as there was a covered bridge that Kevin wanted to see. Our county is full of covered bridges, and I’ve managed to take pictures of most of them. This one is called The Office Covered Bridge.

As we were walking across, there was a nice breeze coming through the windows, and the sound of pigeons in the rafters (and we were hoping that they weren’t directly ABOVE us)

Once across, we discovered a parking lot with a picnic area and several of these flowers.

After checking out the bridge, we drove on to Salt Creek Falls. When we arrived, the road to the falls and the parking area was closed, so we did have to walk a bit. Heather wasn’t expecting a little hike, so she wasn’t wearing hiking shoes. I think that after this, the rule of thumb should be, that, if you plan a trip to any location with the word “Falls” in it, you should probably bring hiking shoes and a jacket. Anyway, a walk to see a waterfall is always time well spent. I have never been disappointed. 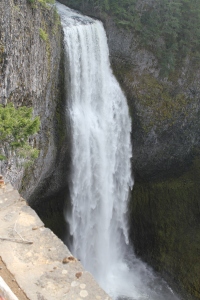 I think that if we had been better prepared, we could have stayed longer and hiked around a bit. By the way, while at the falls, we did try to take some family pictures, however, either we didn’t like the way we looked, or one person wasn’t smiling or the wind was whipping someone’s hair around. So, no, I’m not posting them here.

The ride home included a stop in Oakridge at one of the few A&Ws still around. My husband and I have many childhood memories of eating at the ones in the towns we lived in. Anymore, most of the old ones are empty or housing another business (the one where Kevin went to as a kid is now an Asian restaurant). So when we stopped in this one, Kevin ordered us root beers, and not the kind in the plastic or paper cup. He wanted it in a frosty glass, like we had when we were kids.

After enjoying our little bit of nostalgia, we drove back home, and then left to see “The Lego Movie”. It was a good movie, however I was so tired that several times, I nearly dozed off. I’m sure that a well rested person would have enjoyed it more! I’ll have to rent it when it comes out on DVD, and after I’ve had a good nap.

I hope that you had a Happy Easter and enjoyed your day with those you love!
Elizabeth