During the first week after moving to our current home, we met a new neighbor.   The kids were upstairs, looking out of their new bedroom windows, and the next thing we heard was “There’s a chicken in the driveway!”.  Unfortunately, I missed out on seeing it, so I didn’t get a picture.  Then several weeks later, after our cats had moved to the new house, and were acclimated to the new surroundings and allowed to go outside, the chicken paid us a visit again.  This time, she was followed by her owners who live on the next street over, and told us that she tends to like to wander.

Two days ago, she was back. 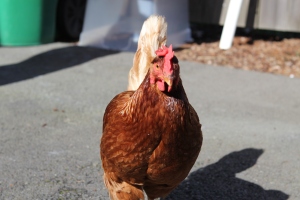 Heather discovered rather quickly that a chicken will peck at you if you get too close, even for a picture. 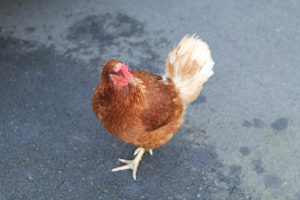 Once again, she roams through cat territory, unscathed.

The cats will figure out the natural pecking order of life eventually!