During the past few days, we prepared for Halloween.  We don’t dress up or trick-or-treat, however, we plan for those who do.

On Sunday, I took the kids to the store to buy their pumpkins.  It was too rainy to go to the pumpkin patch (and my daughter informed me that it didn’t bother her to not go to a dirty field).

On Monday, we carved!

This one is mine.  Heather told me that it reminded her the “Annoying Orange”.   So I guess this is the “Annoying Pumpkin”!  It just needs teeth and a hidden soundbox that says “BLAH, BLAH, BLAH” everytime someone walks up to our door.  That might be scarier than the normal Halloween sounds!

Heather, being the “Hunger Games” fan this year, chose to carve the “Mockingjay”, freehand

Kylin chose to carve out “EVE” from the movie “WALL-E”, also freehand. 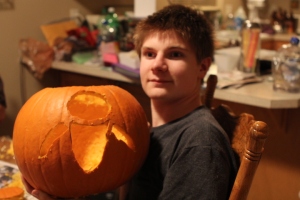 Kevin went for a fairly traditional look this year, sort of. 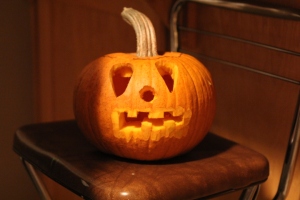 So with our pumpkins carved, and the candy bought, we were ready for last night.

For breakfast, we ate pumpkin pancakes……..

By evening, the pumpkins were on the porch with Coleman glo-sticks  inside… 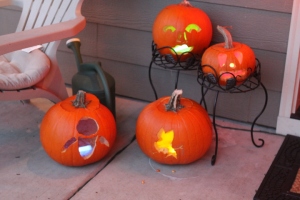 Candy posted by the door (non-chocolate, so that the leftovers don’t tempt me so strongly)

The front porch is lit and non-scary (and we fully intend to have enough lights and leaves to surround the whole front door next year).

No one from our neighborhood came.  Later in the evening, a friend brought his children over and they were given a generous amount of candy.  We apologize for any sugar high that he may have had to deal with on the way home!