We aren’t really tried and true sports fans.  We don’t follow really any sporting events on tv or on the radio.  However, when the Ducks are playing, we do pay a bit more attention to how their teams are doing.  We had the opportunity to buy tickets for the first Lady Ducks basketball game (vs. the OSU Beavers) at the new Matthew Knight Arena.  The tickets were only $2 each, so for a family of 4, that was a pretty good deal for entertainment.

Because it was a sold out game, we decided that we’d avoid the trouble of trying to find parking near the arena, and take our town’s rapid transit system. 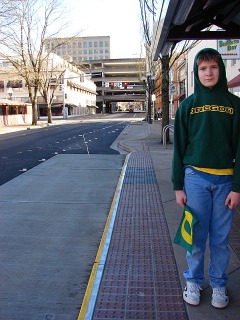 What we didn’t know was that our RTS, which runs every ten minutes during the week, only runs every 30 minutes on the weekends.  So when the bus came, a crowd of people crammed onto the bus and it sped off, and we thought “Oh, it’ll be here in a few minutes.    The picture above is of my son, waiting too long for the bus. 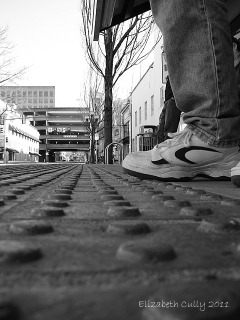 This is just my attempt at an “artsy” pic while we were waiting for the bus.  My son also informed me that he was “done having pictures taken”.  Well it’s not of his face, and he didn’t have to pose, so he has nothing to worry about. 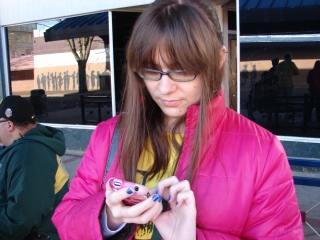 My daughter would have been so bored without her phone and Facebook!  (My husband and I were on our phones with Facebook too!) 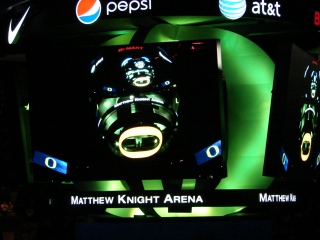 The cool new score board in the middle of the arena! 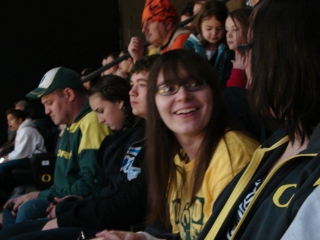 Dear Daughter sitting next to her friend and having a fun conversation!  I love her smile! 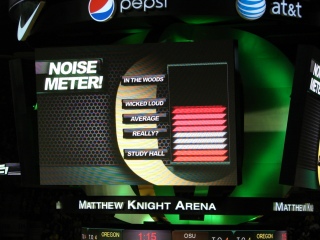 Occasionally, there would be a sign on the scoreboard that read “MAKE NOISE”, which my son loved!  Permission to make noise is a great thing for him.   So this is the “Noise Meter” to let us know how loud we were.  Dear son, enjoyed making noise for a short time and then he was done, and he was ready for everyone else to be done as well. 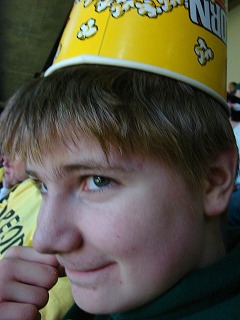 We had some popcorn of course.  Once it was all consumed, my husband put the bucket on our son’s head, hoping that it would attract the attention of the camera guys go get him on the scoreboard screen.  It didn’t, but hey, we tried! 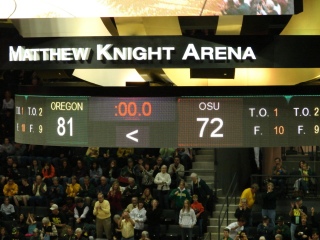 The final score…….the Ducks won!!
Like there was any doubt!
Lp