A little over one month ago, something happened in our county, that unexpectedly changed whatever plans we had for our lives for the next 5 weeks following:

The powers-that-be in our state (Oregon)  and city we live in, decided to rename a long stretch of highway that runs through our town.

Now, originally, we had heard on the news, that on the following day, the city counsel & the mayor would be voting on whether to change the name from it’s current name, to the name of a former state transportation commissioner, a prominent businessman in our town, who had passed away a little over a year ago.  When we first heard about it, we didn’t think that it would happen, and didn’t seem as concerned.  However, on the following day, we heard on the news, that the city counsel and the mayor had indeed decided to change the name.    Well we didn’t agree with that idea, especially when we found out that the change was going to cost a quarter of a million dollars, of tax payers money, during a time of recession in our state, when money is tight and other roads are needing to be repaired.  When we are being asked to vote to raise taxes to maintain roads, paying for road renaming (when we have plenty of other roads, bridges, bike paths etc that are new and nameless) just didn’t seem right.

So, my husband, is a regular on Facebook and he created a page for those who were opposed to the name change and wanted to be a “fan”.   The fan base grew rather quickly (and my husband brought in a co-admin for the page) and within one week, someone came up with the idea of staging a protest, standing on an overpass over this stretch of highway.    So on a Saturday afternoon, probably 15 people (maybe more) showed up with signs (some of which my son made) and protested for a couple of hours (I didn’t go as I had told the kids that I would take them to a movie and I didn’t want to blow them off).  Well this protest caught the attention of one of our local news stations, so that night, my husband was on TV.    By this time, there were over 600 fans on the page.   After this protest, there was talk of having another one at another area of this highway, on the following Monday (“Have fun storming the castle!”).     Then on the following Friday & Saturday, there were protests again.

Now, I am not a protester, I don’t normally get involved in anything political.    However, I did go to support my husband on this issue (numbers help) and I don’t agree with the name change.   By this time, the fan base for the page had reached over 2,000 I think. 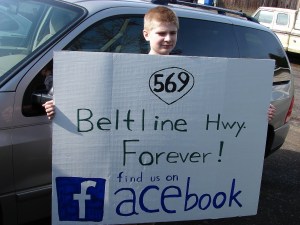 So, for the Saturday protest, my husband had our son make a new sign (maybe one day I can post a blog giving tips on how to protest comfortably and effectively, hahahaha). 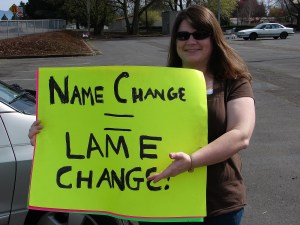 My son made this sign too and it’s the sign I hid behind (because this is really out of character for me, but my husband wanted to take this picture of me). 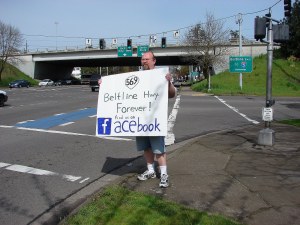 And here’s my husband, with his new sign.  What you don’t see, and I wasn’t ready for, was his use of a bicycle horn, and his hollering.  I have never heard him make so much noise before (considering that we’re always telling our noisy son to quiet down).  So this was new to me!  (and for being in this protest, and the one on the day before, I was treated to a dinner at the Olive Garden and a movie)

So as the weeks progress, our local paper started publishing revelations that there were some possibly unethical arrangements between the family of the new namesake, and the governor and the transportation commission.    Then, the governor and the commission decided to change the name partially and only put two new signs on the highway, one at each end, costing only $1,500 of the taxpayer’s money, and change the rest of the signs when they’ve “worn out”.   Well, who is to say that the commision or department of transportation won’t decide that the signs will have worn out within the next year and still be spending the $250,000 that was originally planned?

Kevin and his co-admin started gathering signatures  to have an initiative put on the ballot, to prevent this from happening in the future (anywhere else in the state) without the citizens of the state being able to vote on it.

The new plan was going to be voted on by the transportation commission on April 20th in a coastal town about an hour and a half away from our town and the road in question.    Several from the Facebook group (which by now boasts nearly 9,000 fans) planned to go as well.

And what kind of homeschooling parent would I be, if I couldn’t turn this into a field trip?   Not every kids has the chance to see “Robert’s Rules of Order” in action, supposedly. 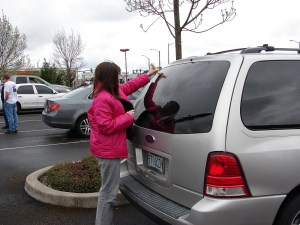 On the afternoon of the 20th, we gathered at a local department store with about 12-15 other folks from the Facebook page, and everyone wrote on the car windows what our cause was. 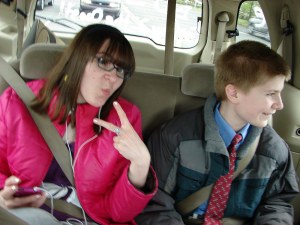 Now, Heather looks like she’s cool with everything.  Really, she’s tuned into her iPhone, listening to the Jonas Brothers and trying to tune out the song “Convoy” and the various 70’s & 80’s tunes from her parents’ childhood that were blaring from the CD player.  Kylin was just happy to be going to the coast and despite the weather (rainy) and being told that we probably wouldn’t be going to the beach, in his mind, he was going to the coast and that means beach.   To quote Mr. Bean, “To the beach!” 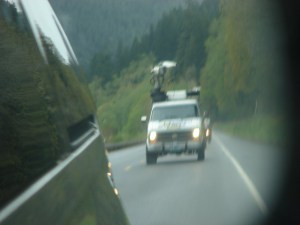 One of the news vans from our town, following us to the meeting (because by now, this was a news worthy topic). 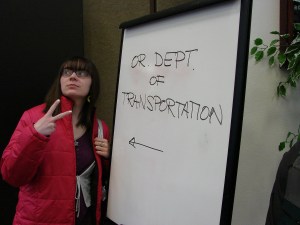 I think that our two kids were the only ones at this shindig.

After opposing testimony from about 10 people and testimony from one person in favor, who was also an employee of the family of the namesake, the transportation commission voted in favor of the name change.  So, that was a disappointment to this convoy. 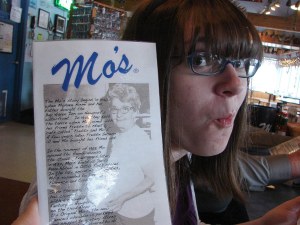 After the meeting, several of us from the FB group, met at Mo’s for an early supper/snack.  For those who have never been to Oregon or at least the coast, Mo’s is famous for their clam chowder.   Our family hadn’t eaten there in several years because we don’t eat any kind of meat, and the primary purpose of this restaurant is to serve seafood.   We were able to find something meatless on the menu however, so we didn’t starve. 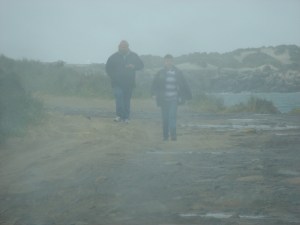 After our dinner, our son was very persistent about going to the beach.  It was not “go to the beach weather” at all.  It was so windy that it was shaking our van, and the rain that was coming down, was actually coming in at an angle.    The rest of us in the car, really had no desire to go outside.  However, Kylin, in his mind, was disregarding the weather.  We were at the coast and we must go to the beach.  So we found an area where one didn’t have to climb over a dune (in the wind & rain) to see the ocean.   Kevin ventured out with the boy so he could have his wish fulfilled.   Heather & I waited in the car, and stayed dry.  At one point, we did receive a text from Kevin that just read “Brrrr!”.   After about 20 minutes, they came back, and Kylin’s shoes were wet because he was close enough for the water to come up on shore and soak his feet.

So after a long day, dealing with this political venture (and in Kylin’s case, wet feet), we headed home.    Below is one of the signs we came across (several times)  on the trip: 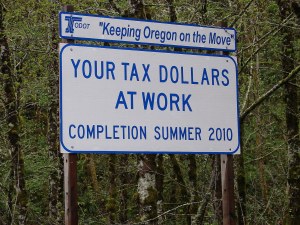 Interesting, when you consider why we were making this trip!