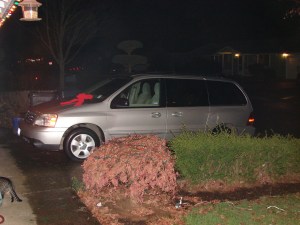 So today sort of begins my birthday weekend. I’ll be 41 on Monday. My husband has been out doing some birthday/Christmas shopping this past week, which had him coming home late from work a couple of times. So tonight, when he came home from work, he asked me if I wanted to start my birthday celebrating tonight. Of course, I’m not going to say “No”. So he handed me a metallic red box. I opened it, and it was full of metallic red confetti, and at the bottom of the box was a single car key. I realized that it was a car key, but just couldn’t fathom that I was getting a car on my birthday! So he took me outside and parked on the street was a 2004 Ford Freestar mini van!

The car we have been driving, a ’94 Oldsmobile for the past two years. In that time, it has slowly had things go wrong with it. As of now, both front power windows no longer have power. The side passenger window for a long time wouldn’t stay down so it’s now held up with duct tape, (but still tends to come down so I have one of the kids hold it in place when I drive over railroad tracks & speed bumps). The radio antennae stopped extending so I couldn’t get the Christian stations on the radio. And the air conditioner stopped working. And by now, the engine hasn’t been sounding too well either, and Kevin hasn’t felt very comfortable with me driving it with the kids to church and back (driving through rural roads to get there). So he, with the help of our neighbor, test drove and picked out a van, with low miles (always a plus). And tonight, I’m back in the mini-van club!