Before I start, I will be courteous enough, to warn you ahead of time, that there is a shameless plug coming up in this post.  If you don’t want to see it, I won’t be offended if you scroll past it.  If you do want to see it, it’s there for your enlightenment, so to speak.

About a year ago, I had posted an entry about how our state, city and transportation commission had decided to rename a stretch of highway, using our tax dollars, against the wishes of the majority of our town’s citizens.  I also mentioned that my husband and a few other gentlemen came together and organized protests against this move, as well as spoke before our city council and our transportation commission, trying to remind them that the majority of constituents were against this idea.   Signatures were gathered in an attempt to get something on the ballot so that things like this can be voted on by the voters, and not have the powers that be, make that decision for us.   Unfortunately, we didn’t get enough signatures.  However, that led to my husband running for office (he garnered about 5 % of the vote).  That experience also led him, and 3 other gentlemen (from the original group) to form a local political “watchdog” group, with the intent to bring things to the attention of the public, in order to keep our local government accountable to the public they were elected to serve.

Get ready………..here comes the shameless plug……..

So that brings me to what prompted the civics lesson.  Personally, I think that any opportunity, to take your children to city, county, or state government meetings, that are open to the public, can count as civics lessons.  You can teach your children how  government is supposed to work, and then take them to the meetings so that they can see how it really works (how good or bad it works, depends on where you live).

Our local transit district is planning to place a rapid transit bus in an area of town that would be adversely affected by it’s installation.  The street that it’s intended for is lined with businesses that will experience a huge disruption in their income or will be forced to lose or have to move their businesses altogether.

There have been  city council meetings that were open to the public, hearings involving the transit district, and as of this past Tuesday, a hearing before the Metropolitan Policy Committee.  My husband, his friends in the watchdog group, and several other business owners spoke, hoping to convince the committee to postpone the plans for this rapid transit line.

So, I brought my kids to see their dad, and others, let their voice be heard.

This was my attempt to get them to smile.  My girl did a very good job.  My boy, looks like he’s trying to figure out how to pick on her or something.

When one goes to speak before a committee such as this one, one needs to get in line, and sign up for their time (which is about 3 minutes long, so speak fast) 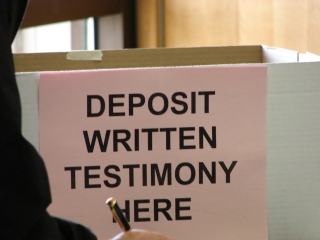 The transit district also sent a couple of security guards.

My guess is that since there were only two, that it was either assumed that there wouldn’t be a full room, or we wouldn’t cause much trouble.  In either case, they were right.

Anyway, two hours and over 40 speakers later, the committee decided that it was time for a break.  Since my husband had already spoken, we decided to go on home.

Now for as much as my daughter was not looking forward to going to this meeting as it would be boring, she did remember what was said, and could discuss it with us a bit.  I also saw her page on FB where she was explaining to a friend what the meeting was about.  So I guess that counts somewhat toward an essay, written/verbal combo………perhaps.

My son probably won’t remember much about what was said at the meeting, but he does know what it was about, and he did do a very good job at sitting still and not complaining about how long the meeting was taking.  Very good, considering that he didn’t bring any drawing paper to keep him occupied.

This entry was posted in Homeschooling. Bookmark the permalink.