Tonight, I made one of versions of pasta that Kevin and I like, and the kids are ok with.  I found the recipe years ago in a cookbook we were given as a wedding present (always helpful to a new bride).  I’ve made it so many times over the years, that I don’t really need to consult the cookbook anymore.  It is really simple to prepare, and, because when I post on Facebook that I’m cooking something in particular, some of my friends ask for the recipe.  So I thought I’d try posting here on my blog, of what I use to prepare tonight’s meal (and some of the other things that were going on while I was cooking).

So here are the basic ingredients that I use
1/4 C of Olive Oil
3 garlic cloves
linguine (enough to feed your family, you know how much or how little they’ll consume).
1/2 C of Basil and Parsley combined (I didn’t have any freshly grown herbs on hand tonight, but these bottled ones will be fine for tonight).

Just as I was getting started, my son came in and was rubbing his hands all over the counter exclaiming “The counter is clean!” (after I put his artwork away, then yes, it was clean). 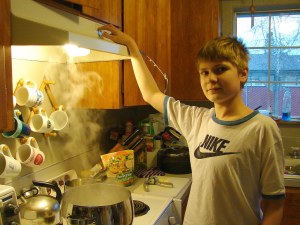 and my son came in and turned on the fan so the steam from the water wouldn’t set off the smoke alarm (it only happened once and it was caused by steam in the bathroom after a shower.  Ever since, he’s been concerned about steam setting off the alarm).

While you are waiting for your noodles to cook……….have a cookie (and if you want to enjoy it in peace, wait until the kids are in the other room)!

After your noodles are cooked, drained and in the serving bowl of your choice, heat 1/4 Cup of olive oil in a small pan……… 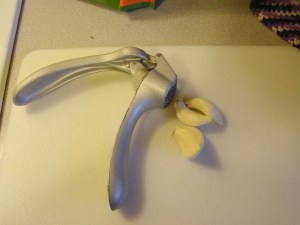 mince 3 cloves of garlic and add to the heated oil, just long enough for the garlic to become a light brown color (if you leave it in too long, it will turn black very quickly!).  Then pour the oil with the garlic over the pasta and toss the noodles a bit. 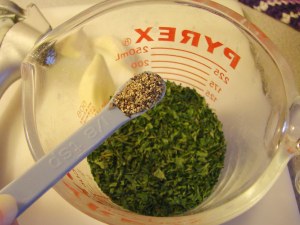 Then combine 1/4 Cup of Parsley, 1/4 Cup of Basil, & 1/8 teaspoon of pepper, and add it to the pasta and toss the noodles again (it will be very noticeable if you don’t).

While I was tossing my noodles, my husband and kids were spending “quality” time, defacing pictures in our yellow pages!   Who needs TV when you have the phone book for entertainment?

So, now dinner is ready.  The recipe calls for Parmesan cheese to sprinkle on the pasta and any other time, that is what I would use.  However, I was out of Parmesan, so I used Mozzarella cheese.  No one seemed to mind.  However, Parmesan is the better cheese for this dish.

A word to the wise: be sure not to smile at others, until you’ve brushed your teeth and checked them with a mirror!

This entry was posted in Cooking. Bookmark the permalink.